Eek, was 15th July actually the last time I posted? I am still here! I...haven't been reading, actually. Sorry. I do intend to come back. It's all Twitter's fault.

Not much happening, mind you. I went to see The Indelicates a couple of weeks ago and they were amazing; I went to see Skunk Anansie tonight and they were OK. (There were seats at the 13th Note and not at the O2; this may have something to do with my enjoyment, since I am, apparently, old.) And I was never a huge fan of Skunk Anansie anyway - I love Skin and like maybe a third of their songs.

So I have a question my google-fu is failing me on - I keep just getting results from the Daily Mail. I have a feeling all the information I want will be on websites in other languages, which isn't that helpful to mostly monolingual me.

In the UK we provide translators - and translated leaflets, government and local council information etc - in various languages, for immigrants. You can get a translator if you're going to the doctor or to the hospital or to court, or social services or various other things. Are we unusually generous about this? What level of support do other countries give?

I was arguing with somebody the other day who claimed that we're the only country who provides any of this, which I'm pretty sure is nonsense, but am having trouble proving. (I did argue that it provided jobs for translators, but I don't think that convinced.)

Hello! I've been meaning to blog about loads of things, but obviously now that I've got round to sitting at the "post an entry" screen my mind's gone blank. So, general update.

...Hmm. I feel like I've been Doing Stuff, but I haven't really. My friend J's back from a while in Australia (and London for ~5 years before that) so I've been hanging out with him a bit - he's doing a huge comics clearout so I bought a full box of comics off him, including the full run + offshoots of Books of Magic, and a bunch of smaller runs of things. Like the 5-piece comic of 300, which has just beautiful art and really high production values. It feels weird to be raving about the quality of the paper, but...yeah. He came round yesterday and we watched the first six eps of this season of Who - he hadn't seen them because: Australia, and it was so much fun to watch them again now! Everyone should go back and watch at least Eleventh Hour and the Angels ones. (And he did not notice The Scene in Flesh & Stone, and I didn't squeak or giggle or stare at him intently. Yay me.)

We're going to watch the other seven at the weekend sometime, and I'm dreading The Lodger. I don't know why I've (still) got such a visceral reaction to it - I actually get angry when I see people saying they liked it. (Especially Jacob from TWOP, who loved it and hated the finale, which is just weird.) Though I realise this reaction is irrational, and haven't been shouting at people, just staying out of the conversations and avoiding reading good reviews of it. Hopefully on a re-watch I'll be able to pick out what exactly it is that hit one of my buttons, and assess the rest more rationally!

Media stuff: There's a Studio Ghibli game coming out for the PS3, and the trailer looks amazing.

Pratchett's Unseen Academicals is far better than I had expected, given that I haven't been that impressed with his books of late AND it's about football.

I'm still keeping track of the books I'm reading on a flickr set - about 75 by mid-year, which is pretty respectable. (72 in the set, but one of them's a trilogy so counts as three. And I've read maybe three or four books on my phone, too.)

I've started watching The Wire, and it's mesmerising. I'm getting to it late, but it's worth it.

Oh, more general media stuff - I spent six or eight hours on Friday night watching the news channels frantically attempt to cover a police stand-off live when they weren't allowed anywhere near it. And with people all over the country watching and discussing it via Twitter and forums and blogs. SO WEIRD. New media is definitely changing our psychology, I think. It's voyeuristic, but (although this sounds amazingly pretentious) it also felt like witnessing, like the act of watching it was important somehow. Some people seemed proud to turn the TV off and thought that those of us watching it were like ghouls at a car crash, but it would have felt wrong to me to turn off the TV and the news websites and pretend it wasn't happening, to go and read fanfic or play computer games while people's lives were in the balance. There's so much stuff tied up together it's hard to analyse though - separate from the "witnessing", it was interesting from a "watching the media" point of view and from a "psychology of the public" point of view; the coverage was intermittently hilarious and surreal (Gazza?!); and the people discussing it on Twitter were witty, thoughtful, intense, and generally engaged.

And then I spent a disproportionate amount of Saturday and Sunday arguing about the whole thing with IDIOTS, because that's what the Digital Spy forums are for.

Right now, that episode seems close to perfect. I'm sure there are problems with it - especially if you object too much to fantasy in your SF - but it was just stunningly executed. ( Collapse )

I have forgotten many things, I'm sure, and this is a bit all over the place. Because my head is. Still so much thinkiness! Some combination of the number of hints dropped and the faith the fans had in Moffat and his plotty timey-wimeyness gave this season the most intellectually involved fanbase I've seen for a while - as opposed to emotionally involved, like a lot of the reaction to Rose's story arc, and even Donna's - and I love it. I love that there were theories all over the place, and people debating and screencapping and comparing notes. And from what I've seen of the reaction, most people have been sastisfied with the resolution. We trusted Moffat, and he delivered with wit and heart and panache.

Analogy rating: Like being in the countryside on a clear night and watching the stars, when you rarely leave the city. And then watching them swoop and whirl like Van Gogh's Starry Night.

So we keep hearing about how it's Totally Racist for Scottish people (or Welsh or Irish, I guess) to support Anyone But England in the World Cup. We should all support England cos they're, like, our next-door neighbours. When Alex Salmond or Andy Murray mention in passing that they might not support England, they get a pasting from the English press.

But apparently it's Absolutely Fine for a national British news programme to say:

Now for England fans, the only good news so far in the World Cup is that France are doing even worse.

That, on the other hand, is more like it. Fully made of awesome and win. And ZOMG. Now, fingers crossed Moffat can stick the landing.

Have to watch it again, because my mum kept wandering back and forwards with washing baskets and things. Sigh. But watch it again tonight, or wait till I get back home to my big telly? Both, probably. So MOAR LATER.

Worst ep of the whole reboot - even worse than Fear Her, if that's possible. Not worth a proper review, except to note that James Corden wasn't the worst thing about the episode by a long way.

Next week looks good though.

I can't give things ratings any more. TV is like politics or sexuality - the deeper you look into it, the more you see you need some kind of three-dimensional hyper-linked Venn-diagram-cum-flow-chart rather than a simple sliding scale. I will rate using a system of florid analogies, instead: this episode was like watching a satellite view of the world on a cloudy day. Everything is perpetually shifting and sometimes all you can see is a carpet of grey, but other times you can see amazing shapes in the clouds, and now and again the skies will clear and the stunning potential of your view is realised. And it's worth all the time you spent staring at grey.

Open to: All, detailed results viewable to: All. Participants: 15

Should I buy a super-snazzy laptop with a picture of a robot on it to replace my desktop?

I do need to replace my desktop computer, and going by all the sites I've looked at and the people I know, I can't really see a reason to buy another desktop rather than a laptop. 99% of what I do on my computer is internetting or watching TV, I don't do much intensive processor or graphics stuff. And I already have a 1TB external drive, so "only" having a 500GB hard drive wouldn't matter much. Also, Dell have a sale on, and I've been pretty happy with my Dell desktop.

Anything else I should be considering?

I just (skim)read 12 days' worth of your LJ entries. Hugs to, oh, what seems like about 75% of you. On the other hand, YAYCONGRATS to

startron on finishing uni! (Also, I can remember when I'd hit the skip -980 limit after about four days of missing LJ. Nostalgia...but I can't complain, for I am part of the problem, not part of the solution.)

Things I have done: seen Neil Hannon's solo Divine Comedy show in Edinburgh and Derren Brown's Enigma show in Glasgow. In the hottest theatre ever. But they were both amazing, I have to say. Looking forward to the new Divine Comedy album - out next Monday! You'd think I'd have done other things, but...not that I remember, apart from roleplaying.

Things I have read: Loads, obviously. I didn't order anything from Amazon for the whole of my March-April paypacket month, which was very restrained of me, but unfortunately meant I ended up with this at the end of April: 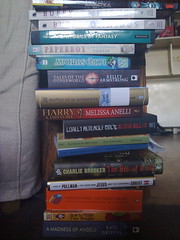 (If you can't see what they all are, there are flickr tags if you click through - I don't think there's a way to pull the tags through here, is there?)

I haven't read all of them, obviously. I read seven of them, but then got sidetracked by new Doctor Who books and the new Trudi Canavan and...yeah, I have a problem. I've read 59 hardcopy books so far this year - I've been keeping track of them using a set on Flickr, which is the laziest way I've found yet. Take a photo with my phone when I've finished, upload it, and then spend five minutes a month sticking them into the set - and it seems to be working so far, I've never still been keeping track in May before. And I've joined Worldcon as a supporting member and downloaded my Hugos packet, which gets me a metric shit-ton of great writing and the ability to vote in the Hugos, for about £40, so I'll have to get on that. (Too much time on my hands, yes, but I do read fast, honest...)

And finally 1: Weird Clouds Look Better From Space (via

And finally 2: An advanced course in bookselling, courtesy of Waterstones, Sauchiehall St: 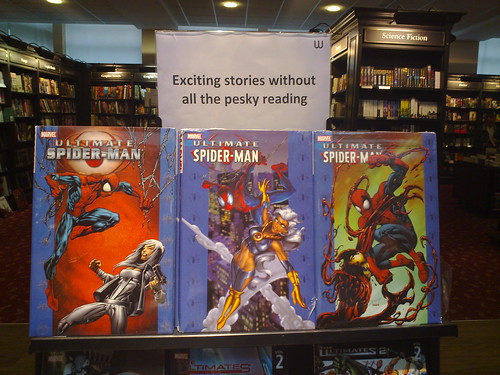